This June, I celebrated my 70th birthday.  Not unusual in itself; lots of folks do.  But, I am a 4-time cancer survivor. 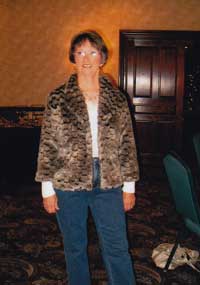 My first cancer diagnosis at age 31 left me unable to bear more children.  As the youngest of three children, I thought three little ones would be great.  That was not to be and I felt so blessed to have one child.

Life goes on.  Except for periodic breast biopsies, I was healthy and active, faithful about checkups, for the next 20+ years.

In 2004, I was not feeling quite “right” and called the family doctor who ordered an ultrasound.  Within two hours of the procedure, I was told there was a mass in my pancreas, which was probably malignant.  In a mega second my life passed before me as I thought, “I guess this is it,” having heard that pancreatic cancer was inoperable.  Within two weeks I had surgery at Johns Hopkins Hospital. 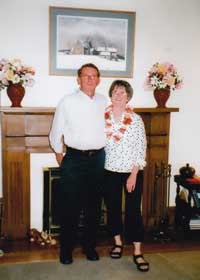 The following year was filled with treatment and healing.  In the middle of all this, my husband Bill and I celebrated our 40th wedding anniversary with a garden party that summer, surrounded by family and friends.  It was a validation of life, our doing that.  “Grab the moment.  Make it work.”

(Sue and her husband Bill, pictured at right.)

Healing once again, I decided to do something new and signed up for ballet instruction. What a joy that was.  In January 2007, I took weekly lessons and was so happy with the experience; it was like walking on air, the elation I felt.

A routine mammogram in May of 2007,  just before my 66th birthday, brought me back to earth.  A cautious radiologist suggested further testing which confirmed a malignancy.  More appointments and testing ensued, followed by surgeries for a mastectomy and reconstruction.  All went well until I was told chemotherapy was highly recommended.  My mind simply would not, could not take it in.  Not again!!

Time and reason changed that.  I began treatments, which my body did not accept well.  With medical guidance and prayers and encouragement from loved ones, I persevered.  Eventually, my body healed and I began to “wake up” to new endeavors.  This year, I have earned sufficient hours to become a certified Master Gardener.

More importantly, I believe I am serving a greater purpose that only God knows for certain.  I’ll continue to live each day to its fullest and encourage others to do the same.

#5 irene 2013-10-26 17:24
I have just had a lumpectomy/ my 4th cancer diagnosis ,12 years ago kidney and colon cancer/ 3 years ago colon and now breast.
#4 Janyce Collier 2012-01-17 22:07
Sue is an amazing person - to meet her you would never realize all that she has been through. Despite this she looks forward and keeps challenging herself. She is a kind, loving, and optimistic person and is truly an inspiration to me. Being in her presence you can feel the spirit that is calm, reassuring and a comfort. Your mission continues to inspire others. Thank you!
#3 bouncer 2012-01-04 11:34
What an inspiring story. Thanks so much for sharing. You are truly an amazing example for so many. We both know how to live in the moment.73dkz
#2 FacingCancer 2012-01-03 17:21
Kitty, thanks for your kind words! We're inspired by Sue's story and spirit as well!
#1 Kitty Dugan 2011-12-20 21:37
What an amazing lady. She walks with grace and light to shine on the world. Sue, you are an inspiration for all of us who are living with cance and for all of us who are living without cancer. The point is to live. Thank you for your lesson. Love and Hugs
Refresh comments list
RSS feed for comments to this post
JComments
back to top